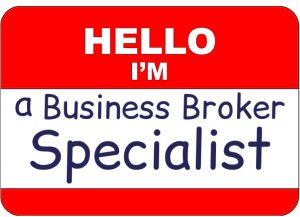 When Aaron Drucker, a business brokerage owner in eastern Pennsylvania, first got into the business in 2000, he met an eccentric older broker during a deal for a large diner in south Jersey. Aaron was representing the buyer in the deal.

“So we go to a meeting at the restaurant, and as we sit down, the owner takes out a phone, a regular phone, not a cell, and he dials a number and puts it on speaker,” Aaron explains, laughing and shaking his head at the memory. “This quick talking older voice is booming over the phone, telling us his name and he’s a restaurant broker for 39 years and he knows everything about brokering restaurants and he does everything from small cafes to hotels and don’t talk, just listen, he’s going to tell us how this is going down.”

Aaron says the older man was indeed a veteran restaurant broker (“Restaurant broker, NOT a business broker. He wanted us to know the difference.”) who did deals all over the world from the comfort of his home office in northern New Jersey. The older man tried to dictate the terms of the deal, saying he was looking out for both sides, but the buyer was wary of the man’s demeanor and self-proclaimed neutrality and expertise.

“I had to call this guy later and tell him to cool it,” says the ex-Airman, originally from Miami Beach, Florida. He moved to Pennsylvania after getting married and leaving the service. “I said we had a nice deal, the buyer could only afford X amount of money, and to stop pressing for more. I also told him we had concerns and the seller had to address them before we went forward. That calmed him down and we ended up with a good deal. But not before I had a few more similar conversations, telling the guy I didn’t care if he sold a casino in the Bahamas. I only cared about the diner in Moorestown.”

Aaron asked that the man’s name not be used. He did not want to embarrass him, though he thinks the man retired only a few years ago. He adds that the man was a “genuine artist” in the realm of restaurant deals. Unlike Aaron, he would only do food-related business, eschewing anything that was not a food establishment or bar.

Josh Factor, owner of Vertica CRM, a software company that caters to the business brokerage industry, says he immediately knows the man. He laughs out loud at the name, saying yes, he was quite the eccentric character and seemed to do many deals over the course of decades based on force of will and a bank of knowledge that was unrivaled in the world of restaurant brokers.

“Not everyone can specialize in a single industry as a business broker,” he explains. “Some guys, like the one we’re discussing, was an expert because he began his career as a young man working and later owning a restaurant. Over the years, he was able to hone his knowledge. He could tell you if a pizzeria was making money based on how much tomato sauce they bought.”  Josh further says, that he himself was the company expert in selling Laundromats when he was a practicing business broker.

Josh says most brokers do a wide range of business because one industry or niche could face a downturn or adverse circumstance that hurts present and future deals. There are veterans like the one discussed who might dominate that grouping. He adds that many brokers think that they can make a living this way, but soon find out that diversification helps, just like in any portfolio.  Some of Vertica CRM’s client base includes clients who specialize in working with Pharmacy specialists, Car Washes, Medical Practices, Restaurants, event Route specialists.

“There are laundromat guys and bar guys and warehouse guys,” he says, talking about business brokerage specialists. “Some of them are doing great. But they’re by far the minority. I think you need to be well-rounded and open to anything.”

He stops and starts laughing.

“But man, if you can be like that guy, working for decades and having business owners and buyers hang on your every word, you must be doing something right!”

Joshua Factor is the founder of Vertica CRM. A software company dedicated to helping Business Brokers and M&A professionals work more efficiently through technology and earn more commissions. For more information about their main product, Business Brokers CRM, visit www.BusinessBrokersCRM.com or call   +1 212 381 4994 in the USA or +61 385 184 759 in Australia.